5 Best Camping Hammocks For Every Type Of Adventure

“Hammocks are incredibly comfortable, and they provide a refuge in the wilderness.” – Ben Louvis, hammock enthusiast.

My friend Nathan introduced me to hammock camping. He grew up camping in Michigan. Michigan has plenty of trees and a thriving hammock community. And hammocks have been used by humans for hundreds of years.

I grew up in central Texas, and while east Texas has plenty of trees, central Texas is mostly flat open plains. And my generation started out using the Vietnam era canvas US Army surplus tents.

But I have become fascinated by hammock camping because hammocks are lighter and more portable than a tent. You are above the ground, which provides more protection from critters, bugs, and snakes. And you don’t have rocks and sticks poking into your back.

Plus, many hammocks can be used as a tent if suitable trees are not around.

This article will share what I believe are the 5 best camping hammocks on the market as well as the top tips on hammock camping.

This hammock solves the biggest problem with traditional hammock camping - providing shelter if there are no trees around.

Any camping hammock can be improvised into a tent. But you will have a faster setup if the hammock is designed to be a tent.

The inside of the hammock setup includes 2 O rings, which make it easy to hang additional equipment like a small LED lantern.

However, we should point out the 2 most common complaints I read in the hammock Facebook group I joined.

The first is that people said that it can be easy to tip over. One person said “Tippy as all heck.”

But many people who owned them said they loved them. And they were their best sleeping.

Yet, everyone, even the biggest fans, all said it was heavy and bulky. This is because of the aluminum poles. Which cannot be swapped out. However, they said it was no worse than a tent.

If you want to learn about this intriguing combination of hammock and tent then: 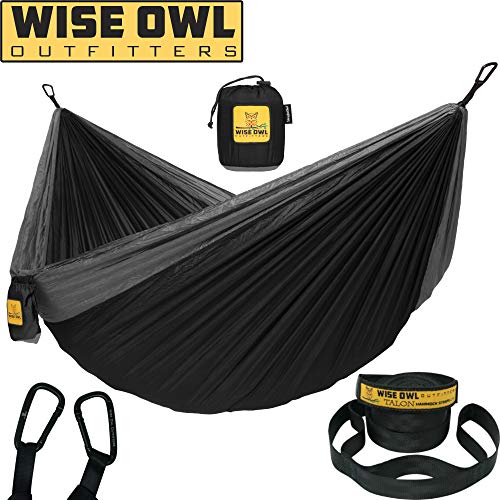 This a traditional camping hammock. It’s not designed to do double-duty as a tent in the same way the Lawson is.

What really stood out for me on Amazon was how responsive Wise Owl was to the 1-star reviews.

It appears that everyone had been responded to with a thoughtful response.

One more thing that stood out is that they rate their hammock to hold up to 500 pounds.

Most other hammocks rate their hammocks only to hold 400 pounds.

Another great thing about this hammock is that it comes with straps instead of ropes.

Many people who camp with hammocks prefer to use straps instead of ropes. They’re easier to attach and detach. And they won’t strip the bark off of young trees.

You can learn more about this hammock at:

Based on the research I have done, Eno is the current most popular brand for camping hammocks.

Many people buy them and enjoy them without needing anything else.

The only complaints I could see in the hammock group on Facebook were by the hard-core hammock campers.

Which seemed to be split between hikers who were on a mission to cut every ounce and those who want to make their own hammock.

In other words, if you are looking for a solid hammock to get started, the Eno would make a good choice.

You can learn more here:

I was recently at dinner with a friend and her son. He’s thinking of joining the military. And he’s 5’8”. I told him that he’s the perfect height for submarine service (I didn’t serve, but I got my research skills from studying military as part of my initial education around nuclear proliferation in the 1990s. Which is also how I got into survival prepping.).

He’s also the perfect height and weight for this hammock.

This is an intriguing design as long as you meet the height and weight requirements.

What catches my eye is that version that has a bottom entry. According to Hennessy this is supposed to make it harder for mosquitos to follow you into this setup.

I don’t know if this is true or not but you should practice how to get in and out of the hammock before hitting the trail.

You can find out more here: 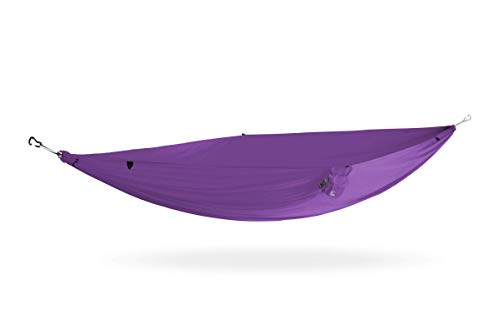 I was hesitant to include it because there weren’t many reviews on Amazon. But there’s several conversations on them in the Facebook group.

Many people own and enjoy these hammocks. They also say they have great customer service.

As with the nEno there isn’t anything to standout. But if you want to learn more, check it out here:

Republic of Durable Goods Mock ONE 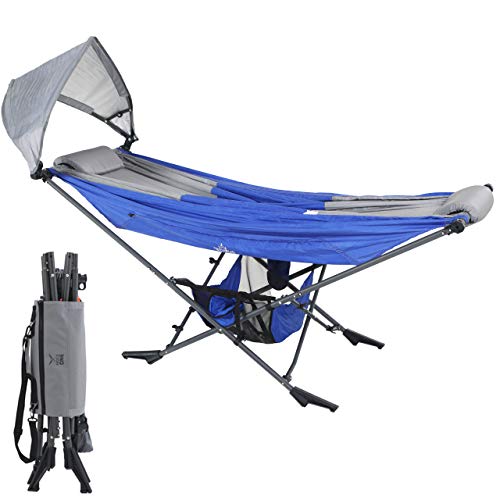 Straps are preferred over ropes when connecting hammocks to trees. They are simpler to use. They allow you to attach and detach faster. And they don’t damage the bark on a tree. Which allows you to leave no trace about your camping.

While sleeping in the air is more comfortable than sleeping on the ground, the air beneath you will make you feel cold if it’s below 68 degrees.

People in the hammock community call this “cold butt” syndrome.

And a sleeping bag doesn’t help. A sleeping bag requires it to remain fluffy to retain its warmth. And in a hammock, sleeping bags end up getting smashed up. Thus they are not as warm.

And sleeping pads don’t work either.

Instead, you should bring and underquilt. These are like blankets that are designed to fit into your hammock to provide warmth for your backside.

A top quilt is like an underquilt but, as the name implies, goes on top.

While everyone I have found in hammock camping says you should get an underquilt for your hammock, a top quilt is optional.

Instead, you can use your sleeping bag or even a traditional blanket.

You need hooks to help hang your hammock. And that’s what carabiners are rate for. They are spring clips to connect the straps with ringlets in your hammock.

Parachute cord is always a useful piece of equipment to carry along. You always need to tie down something, hang something, or heck even emergency shoelaces.

With a hammock, it is easier to make a more comfortable hang by using a structural ridgeline.

A ridgeline is a line that goes between two tie-down points above the person who is lying in the hammock.

There are three uses for a structural ridgeline:

1 - It allows you to control the amount of sag in your hammock. orThis gives you the most control over how comfortable your lay will be. Including the slope and allowing enough fabric to enable a diagonal lie.

3 - You can hang additional equipment from the ridgeline. This can be as simple as an LED lantern, but you can also attach a pouch to keep your phone and glasses.

Some hammocks come with an integrated ridgeline, but if they don’t, you can make your own with parachute cord.

There are five benefits of hammocks over tents.

First, you are not sleeping on rocks and sticks. Fans of hammock camping say that the best sleep they ever have is in hammocks because you are “sleeping on air”.

Second, by not sleeping on the ground, then you are also not sleeping with bugs, critters, and snakes. I read that hammocks were created by fishermen in a tropical climate explicitly to avoid snakes. While I’m not afraid of snakes, I also don’t want to wake up, keeping a rattlesnake warm.

Third, you can set up your hammock’s rain fly faster in a storm. Attach your ridgeline first, then get the tarp set up, and then you can finish setting up your hammock under the fly.

Fourth, hammocks are typically more portable than tents. This is particularly true if you don’t have any cross-bars or underquilt.

Fifth, they have less impact than tents. If you use straps, carry your trash out and avoid building campfires, this is as close as you can get to a zero-trace camping experience. Even if you build a campfire, this has less impact than a tent. Tent camping has a tendency to pack down the grass and kill it off.

Sleeping in a hammock can be a challenge.

When I was growing up, I seemed never to be able to get into a tent properly.

Heck, I remember one time, I crawled into a hammock my dad had setup. It was a hammock with an integrated bug net. It was like sleeping in a cocoon. And I made the mistake of rolling over on my side.

I’m not sure how I did it. But the hammock started to spin.

Until the rope (this was 30 years ago and before straps were popular) broke, and I feel to the ground.

Anyway, according to the experts on the camping forums, the best way to sleep in a hammock is on your back diagonally.

This is also known as cross-lay.

It will keep the hammock flatter and more comfortable.

The past week in Dallas, reminded me of how unpredictable weather can be. It was the 2nd week of October and we were still experiencing our extended summer.

On Wednesday, we set a record high temperature. It was 97.

And it had been 40 days without any rain.

Then a cold front came through that night.

We had thunderstorms that switched to a steady rain.

Heck, Saturday morning, we dropped below freezing, and we had frost!

In about 72 hours, we went from blistering heat to freezing cold. And I’m sure someone was out camping unprepared.

There are 3 steps you want to do to prepare for rain with your hammock.

The first is to make sure you have hung in a good location. While leaves and branches can help protect you from rain, you don’t want to be under large branches.

Or to hang from a dead tree.

In a storm, these can break and fall to the ground. And seriously injure or kill you.

Next, you want to set up your rain fly. This will keep rain from falling on your hammock. And if you watch YouTube videos, you can see they do a great job.

But one last thing to set up as part of your hammock’s rain kit is drip lines.

Drip lines are small strings of rope or cord that you hang off your straps and ridgeline. They need to be above your head and feet. Their job is to allow water that flows down the straps or ridgeline to drip off the driplines. And thus won’t drop on your hammock.

How to get started

Getting started with hammock camping is simple. Just like with tent camping, you need to buy a hammock and go to a suitable campsite.

However, you will want to go with a more experienced person first. This way, you can learn how to properly hang your hammock, bug net, and rainfly.

If you don’t have any current hammock camping friends, then you can look online for local groups. Facebook and Meetup are great places to look.

Mark is the publisher of Camping Forge.